The PT-571HDCP converts a DVI signal into a signal that can be run over shielded twisted pair cables; the PT-572HDCP receiver then converts the signal back to a DVI signal. Both units feature a bandwidth of up to 1.65Gbps and are HDCP-compliant and HDTV-compatible.

The PT-571HDCP and PT-572HDCP use a multi-coloured status LED that illuminates red when receiving power only, orange when an input signal (on the PT-571HDCP) or output signal (on the PT-572HDCP) and power are attached, and yellow when both an active input and output are attached. The PT-571HDCP employs Kramer’s Power Connect feature where a single connection to the transmitter powers both units. The required 12V DC is transmitted through the twisted pair cable, along with the other signals, to the receiver.

Housed in the compact Pico TOOLS enclosure, the PT-571HDCP and PT-572HDCP are now available from Kramer Electronics sales companies worldwide. 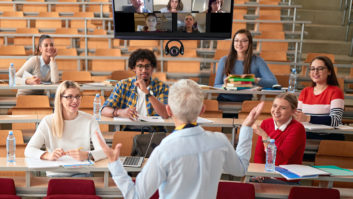