Next up in our countdown to this year’s AV Technology Awards, we take a closer look at the shortlisted nominees for the Corporate Project of the Year.

This year’s awards will be announced during a brand new digital Awards Week running from 23rd to 25th June. The awards programme is held in association with Awards Partners Crestron, Integrated Systems Europe, and the Technological Innovations Group (TIG), and Association Partners AV User Group and Women in AV (WAVE).

Nominees in the Corporate Project of the Year Abcam sells biological research tools – antibodies, proteins, assay kits and reagents – to the life science community. Abcam were spread across three sites on the Science Park, where its corporate functions, including IT and digital technology, were in a separate building to its marketing and projects teams, while the labs were located elsewhere. The new 100,000 square foot headquarters brings employees from all Cambridge sites under one roof (and one global HQ). The development will also spin off new opportunities – Cambridge Biomedical Campus will be the largest life science research hub in Europe with global pharmaceutical and life sciences companies. The purpose was to deliver one of Cambridge’s newest and most advanced smart building with a wide-range of one-to-one meeting rooms, conference rooms, boardroom, informal spaces, hotdesk areas that allow easy connection to colleagues around the world via Skype – The building has been designed around creating collaboration spaces.

“I have no hesitation in stating this has been the most inspirational development project we have undertaken and look forward to growing the relationship and technology delivery to our other offices,” said Ian Smith, IT Projects Manager, Abcam AVMI was appointed as NatWest’s AV partner to consult, design and deliver AV solutions across a number of floors in the building, including the ground, third, fourth and seventh floors. Working closely with LOM architects, over 110 technical specialists helped bring NatWest’s workplace of the future to life using AVIXA standards.

“Early on in the design stage we were looking for one large screen to service the whole auditorium but AVMI intervened and suggested we go down a three screen route. Looking back, that was one of the best decisions we made because it improved the functionality of the space and it improved the way in which that facility could operate,” said Tim Yendell, head of choice and design, NatWest. proAV has completed an extensive AV/IT system integration project for M&G Investments London, an integral part of a major fit-out project which incorporated the largest deployment on a Cisco DNA (software defined) network to date. proAV was appointed as the sole AV contractor to carry out supply and installation of all related AV systems across all floors, with full responsibility for the final design and performance of the systems and timely completion according to agreed timescales.

Gary Razzell, head of user experience, M&G Investments, said: “This new office space has created a free-flowing working environment where staff and clients can work simply and efficiently, either independently or as part of a collaborative team. The project zones, huddle spaces and ‘Think Tank’ areas are flexible open zones where staff can utilise the Microsoft Surface Hubs to great effect. The focus on User-Experience is clear to see.” Upon outgrowing its previous office space, SentryOne relocated over 130 employees into a 35,000 square-foot state-of-the-art facility. As a destination employer, SentryOne wanted a facility that could accommodate growth, as their workforce is expected to grow dramatically in the coming years. Connor Bright, Systems Integration Engineer at SentryOne and his team were looking for intuitive solutions for every area of their workplace. Flexibility and scalability were integral for this project. SentryOne selected Crestron because it provided a rock-solid technology infrastructure that the organisation can depend on both now and in the future. The brand new SentryOne headquarters features a variety of beautifully designed meeting spaces, huddle spaces, a mezzanine which includes hoteling workstations, an impressive training facility, and an event space all powered by Crestron.

“Crestron Flex is Microsoft certified for Teams, which provides the best user experience for our employees to collaborate efficiently with people in the office and across the globe,” said Connor Bright, systems integration engineer, SentryOne The National Automotive Innovation Centre (NAIC), a joint collaboration between Warwick Manufacturing Group, TATA and Jaguar Land Rover, is one of Europe’s largest advanced automotive research, design and development facilities. The 33,000m² centre features an Industrial Design Hub dedicated to optimising collaboration, cultural change and digital transformation, removing the barriers that slow down traditional manufacturing as it transitions into the virtual space. This is being achieved using an array of advanced emerging technologies, complex AV and tracking solutions designed and installed by reality integrator Holovis. These are the catalyst that will mobilise digital and immersive technologies within the industry to aid in the development of crucial future sustainable travel.

Professor Alan Chalmers, visualisation research , Warwick Manufacturing Group, said: “The IDH is a real centre of excellence for motion capture. Their leading-edge equipment includes an OptiTrack 14m×14m motion area which allows you to walk around without restriction. Such a facility will be invaluable for the EU-AHRC project we are currently doing to capture, preserve and disseminate cultural dance. Dance is an integral part of any culture, but many dances are being lost globally as people move from their communities. IDH’s tracked area with its 8.2 surround sound, data ports located in the floor and walls, offering 10gb data flow, will enable dancers to perform their dances in situ and allow us to fully capture the motions and costumes in great detail. Furthermore, the centre will have a key role to play as a facility to enable users to interact seamlessly with Digital Twins; a key part of Industry 4.0 strategy. New tools that will be able to be developed in such a rich environment will make a significant contribution in closing the gap between the latest academic research and essential industrial needs.” 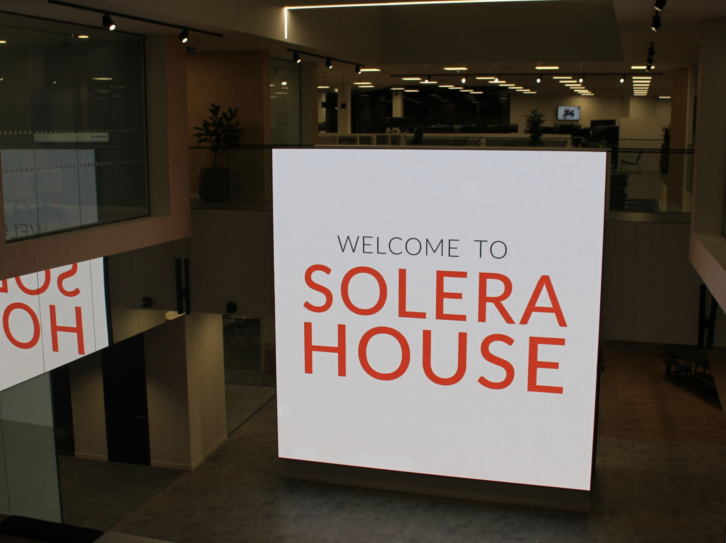 Project AV was given the chance to tender for the new HQ building that was being completed in Bracknell, Berkshire. This new HQ was being built to combine Autodata and Audatex from its two separate offices into a single office to give their employees a better engagement and experience while at work. Both Carl Bastin who is an account director and Project AV and Don Lambresa who is the technical director worked on the specification of what the client required. They worked closely with many personnel at Solera including Ian Weekes who is the head of collaboration.

Solera head of collaboration, Ian Weeks, said: “We definitely recommend the benefits of having such a system to our partners and also the support that Project Audio Visual have given us through this process. In fact we have since given the responsibility of updating and supporting our audio visual worldwide to Project Audio Visual who have since fit out other location in Europe and the US with more projects coming soon.”