A long-term user of Pharos systems, Harris specified the solid-state Pharos LPC X lighting playback control to satisfy the project’s high-channel count and to cope with the vibration and movement resulting from its unusual deployment – suspended from a helicopter on sweeping and ever-changing flight paths.

The ‘UFO’ itself was suspended 50m below the Mi2 helicopter and took the form of a 7m diameter aluminium structure, incorporating 3,000 RGB LED nodes from Color Kinetics/Philips. A total of 9,000 channels of control (over 17 DMX universes) prompted the specification of a Pharos LPC 20. This also brought the benefit of reducing the amount of control equipment that had to be carried in the helicopter because the LPC X natively outputs CK’s control protocol directly to the power supplies for the fixtures.

“I modelled the show in the Designer software, and made use of the external control interfaces to make the UFO light display remote-controllable via SMS text messaging,” explained Harris. “The London-based Pharos team provided fantastic support throughout the project, and for the flights the Pharos controller performed flawlessly as the brain of the UFO!” 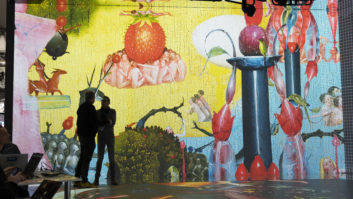